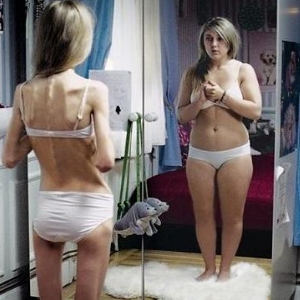 The findings may help explain the role habitual behavior plays in disorders where people persist in making self-destructive choices no matter the consequences. According to the Times, anorexics are not the steely willed ones strong enough to reject the temptations of foie gras or apple pie a la mode or of a dozen chocolate French pastries. Instead, they are creatures of habit who, seeing a table of such delicacies, are more likely to munch over a bunch of grapes at the end of the table merely intended as decoration.

Marquel pondered this and could come to no conclusion. Couldn’t even get a start on the problem. What did it mean to have a habit of eating grapes in front of mamma’s apple pie a la mode or of homemade cinnamon ice cream? How does habit even enter into it? Sounds like preference to Marquel, or a strong willed determination to starve.

Marquel found Dr Pierre Mangetout, director of the study, in the middle of a meal which, though huge, couldn’t possibly satisfy this 350 pound researcher.

“Dr Mangetout, what does it mean that anorexia is just a habit? Is it like smoking? Or drugs? Can you ‘just say no?’ to anorexia?” Asked Marquel.

“In a sense that’s right. We don’t have to worry about generic predispositions or even complex drug treatments. If it’s a habit you can change it. ” he said. And burped.

“So you just replace it with a different habit? Like stuffing your face?” I asked.

“Well we haven’t said that but, for instance, we’ve told people to hold their forks in their left hands as a reminder to eat rich foods. As a habit it can be partly broken by conscious choice.” He said.

“But I already eat with me fork in my left hands. It’s the European in me.” I said.

“Yes. Well that’s not really a problem.” He said.

“It is for the Europeans.  They’re all going to starve and the Americans are going to balloon.” I feared.

“I think we can just switch hands if we are anorexic and that will solve the problem.” He said, rather optimistically.

“It sounds like it’s going to create fork bedlam. It’ll be a cultural riot. Like the sixties.” I said hopefully.

“I think you’re overreacting. What we have found is a small piece of the anorexia puzzle, which kills more people than heart disease.” He tried to remind me.

“It seems to me if you have a habit of eating too little and somebody spends, say, six months, stuffing your face, you’ll come out of it with a different habit, being a fattie. Sounds like a great solution.” I said.

“I wish it were that simple.” He said.

Sometimes I didn’t understand scientists. He just made it that simple. What’s the problem. I decided to change my habits. I decided to stop eating pizza and I succeeded. Mangetout was right! After about five minutes, as soon as I passed Joey’s, I changed again and started eating pizza again. Mangetout was wrong. It was as simple as that.
***
By MARQUEL:  Fasting Habits