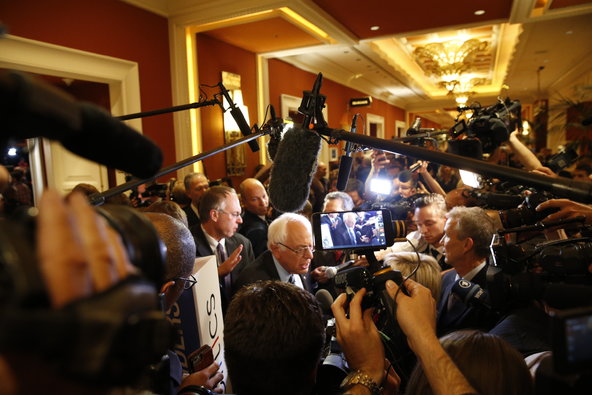 After the debate both Bernie and his wife Jane (Yes! Just like Tarzan! Me, Bernie, You, Jane.) were trapped by the pool of photographers, journalists, and Clinton infiltrators that accompany him. In a replay of a Three Stooges episode, Bernie, Jane, and an overweight CNN executive were wedged in a doorway unable to advance or go back. The scrum got larger and larger until it was impenetrable and after fourteen hours of the fire department work, the plug suddenly poured and out came a crowd estimated at 30,000 people.

Neither Bernie nor Jane could be located.

Marquel called Sanders headquarters and received a recording. He called the Times and asked where Bernie was. They didn’t know. He called the Las Vegas police and was told he hasn’t been seen for two days.

“Last we saw him was in a scrum. It was ugly. Took all night to free them all.” He said.

“So what about Bernie?” Asked Marquel.

“Well are you looking for him?” Asked Marquel.

“Not yet. We’ll probably start tonight if he doesn’t show up.” He says.

“For Christ’s sake. He’s a presidential candidate. If he hasn’t shown up he won’t. Do you think he just went on a drive somewhere?” Asked Marquel.

“Don’t you think you should be searching?” Asked Marquel.

“He’s not officially a missing person until he’s missing three days. Most of these people come home by then. They’ve been on a bender, had a fight with the wife, are off with someone else, don’t get too excited.” He said.

“But he’s with his wife. They can’t both be ‘with someone else,’ and it’s highly unlikely, impossible, he’s on a bender in the middle of a presidential campaign.”

“Stranger things have happened.” He said.

“You think he’s an alien? With aliens? That’s all science fiction.” I said.

“Sorry I can do nothing until 3 days have passed.” He summarized.

I didn’t know who else to call. I called Mufi and explained.

“He’s really missing? No sign of him or Jane? Mufi asked.

“Why don’t you stop by. I just made some pickled water chestnut compote.” He said.

“Not till I find Bernie and Jane. This is unbelievable.” I stuttered.

He was silent. Then he spoke. “Call Hillary.”

“If there’s anybody tracking Bernie closer than everyone else combined, it’s her. Call her and see.” Mufi said.

I called the #Hillary campaign. They were suspiciously evasive. Clearly they knew. But they weren’t talking. I went over the debate in my mind. Each event. The famed emails remark  stuck in my mind. Suddenly they were best buddies. Bernie is too nice a guy. But that’s why we love him. I thought a while. There was an option. I called back.

“Let me speak to Bernie now or I’m calling a press conference and blowing your whole project.” I said.

“He can’t come to the phone but you’re welcome to come over to see him.” They said.

“I’d found him!!” I couldn’t believe it. Missing for two days and nobody even whistled. I checked on the campaign. They knew but were embarrassed. Everything for two days was prerecorded, sometimes holographically.

I went to Clinton headquarters and they led me into a darkened sound stage. They hushed me. There they were, Hillary and Bernie debating. What in the world? Finally they took a break.

I went up to Bernie. “What are you doing here?” I asked.

He smiled, rubbed his hand through his hair. He pointed to Hillary. “She knows nothing. After I helped with the email she asked if I would help her prep for the next debate. I want the debates to be substance. She has bipkus substance. So I’ve been debating her on everything. Progressive taxation, TPP, minimum wage, taxing the rich, free college, social security single payer expanded Medicare. She’s not dumb just terribly misinformed. They tell her what to say. She doesn’t even understand half or more of what comes out of her mouth. I also taught her not to smile so much. What’s to smile about when the top one percent gets more then the remaining ninety percent.?” He asked.

“But Bernie. You’re helping her win.” I said.

“If so she’ll be a better person.” he said. Don’t I owe that to the country?” he asked.

Now I was running my hands through my own hair and I have none. He’s just too nice a guy, I thought. A phrase rang through my head. Nice guys finish last. I don’t believe that.