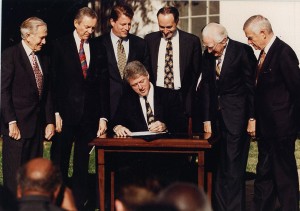 In a history-making decision, Gov. Mike Pence of Indiana has signed into law a bill that officially recognizes Bill Clinton as the first Republican Democrat. Praising the former president, Mr Mike of Indiana also said:

“With former President Bill Clinton next to me, today I signed the Religious Freedom Restoration Act, just as democrat-Republican Clinton did several years ago in the Federal level, because I support the freedom of religion for every Hoosier of every faith. And (democrat/republican) ex president Clinton surely supports us.

“Today, many people of faith but no empathy feel their religious liberty is under attack by government action. Our socialist government would like us to emulate Jesus, for example, and care for thy neighbor. NEVER, I say.

“Today, we stand with private businesses, the fabric of our nation. Greedy employees want health care but they cannot pay insurance. So today Je Suis CEO! We all are CEOs opposing Obama’s Affordable Care Act. If people cannot afford something, then they should not want it or should work hard to get it. Our government should not give it to them because we are not Cuba. We are better.

“Fortunately, in the 1990s a Democratic Congress passed, and my friend President Bill Clinton signed, the Religious Freedom Restoration Act (1993)—limiting government action that would infringe upon religion. He knew better than any of us how much much damage government intrusion could do on cigars as object of cult.

“Today I am telling my people as Bill Clinton told his people,  that if sending your children to school contradicts your religious believes, then you should keep them home. If your god does not want vaccination, then you should not be vaccinated. Whatever your god tells you to do, then you should be free to do.

“Finally, I am proud to say the ISIS is coming to Indiana, and as long as all they do is in the name of god, they should be able to do it here, too, so help me God, you, and the rest of us. Amen.”

And then they turned off the lights, and Mr. Mike went home.

By DANA NEACSU: Seal up your lips & give no thoughts but mum.