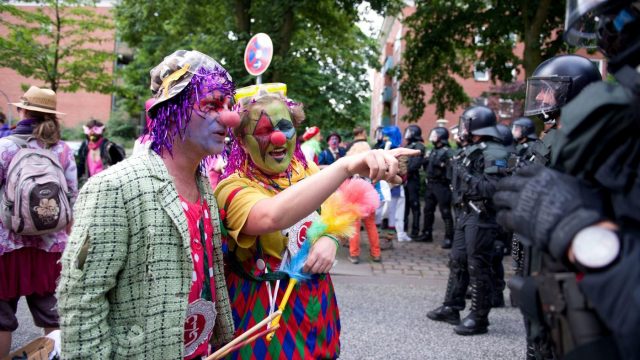 Are so-called alt-right protesters coming to your town? Here’s the best strategy to defeat them: Steal their limelight. When they come for a parade, offer parody instead.

There is a debate across the country over how to handle neo-Nazi marches.

Some say that we should fight them, insisting that the only thing that white nationalists understand is force. But if Charlottesville proved anything, it is that violence is not the answer. If we fight and innocent people die, as in Charlottesville, decent people can only view it as a tragedy. And if it’s white nationalists who are beaten, battered and arrested, they will win as a result. They will present themselves as victims of a liberal elite who would silence their free speech. And with such claims they will attract more members.

In 1928, the Nazis won their first 12 seats in Parliament on just 2.6% of the vote. No one took them seriously. Four years later they had become the largest party in Germany. How did they accomplish this? They campaigned as law-and-order candidates who would bring an end to the violent clashes between left and right. This one aspect of Nazi strategy attracted moderate Germans who wanted civic peace. In February 2017, when black bloc protesters stormed the Berkeley campus, smashing windows and instilling fear, they played perfectly into the same old far-right playbook.
We don’t need a show of force. What we need is a defiant show of fun.

Another group says we should ignore the right-wing demonstrators. Stay away, they argue, and we rob the marchers of the attention they seek. The problem with this approach is that white nationalists will point to the absence of protesters as a sign of their support. Silence will be interpreted as consent. Ignoring extremists completely risks enabling their growth almost as much as fighting them.

There is another option. Let us assemble a truly alternative right: the Ku Klux Klowns.

On Sunday, right-wingers are planning to stage a “No to Marxism in America” rally in Berkeley, where I live. I propose we mass on Memorial Glade dressed in white sheets and clown noses. Let there be jugglers, acrobats and dancing. Let a band of neon-Nazis don bright pink clothing to goose-step on Sproul Plaza. Let there be public readings of “The Sneetches” by Dr. Seuss, with costumed Sneetches acting out the parts. Add in pro-inclusion art exhibits, diversity poetry slams and comedic skits. The form of the performance is secondary; the point is to rob the rightists of attention.

We don’t need a show of force. What we need is a defiant show of fun. 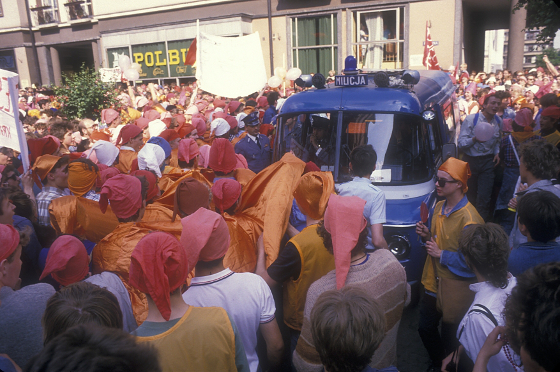 History has serious precedents for satirical protest. The Orange Alternative in Poland arose in the early 1980s in opposition to authoritarian Communist rule. When students at the University of Wroclaw ridiculed the absurdity of their government, they drew supporters to their viewpoint while siphoning attention from the regime. As costumed activists passed out tampons to tickled crowds, they mocked their government’s inability to provide even basic consumer goods. The students, artists, and performers used humor to profound effect, propelling the Solidarity movement that eventually transformed their nation.

More recently, Germans have frustrated neo-Nazi marches by pretending that the marches are a marathon raising money for anti-fascist causes. At one event in Wunsiedel, bystanders threw rainbow-colored confetti on the marchers, cheering them for increasing awareness of anti-racism campaigns.

It’s not easy to be funny when aggressors threaten us. As a blind person and historian who has studied the Third Reich, I am painfully aware of the suffering secretly inflicted on the disabled. They are Hitler’s oft forgotten victims, and remain targets today. When Adam Hochschild of Berkeley’s journalism school interviewed a former neo-Nazi in the 1990s, Hochschild discovered why the man had left the movement. When his son was born disabled, a leader in his white power group told him that the boy would need to be destroyed. This ignorant and violent creed is hardly humorous, yet we must find ways to fight it that do not help their cause.

Parodying far-right bigots is a form of peaceful protest that makes them far less frightening. It mutes their thunder and draws supporters to our side. When the Ku Klux Klowns, the neon-Nazis, the Sneetch brigades and merry bands of jokesters take the stage, we will sap white nationalists of their greatest source of strength — the fear and hate on which they feed. Film everything, and later, years from now, we will watch reruns of the foiled neo-Nazis, and the joke will be on them.

Zachary Shore is a senior fellow at UC Berkeley’s Institute of European Studies. He is the author of “What Hitler Knew” and “A Sense of the Enemy,” among other books.