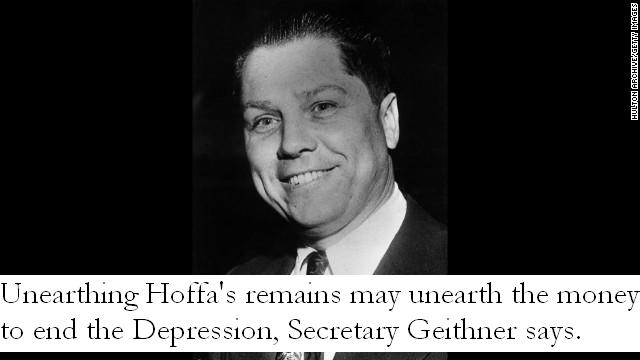 Broke, the US Treasury has enlisted the FBI to help find the Teamsters’ hundreds of millions of dollars, money which disappeared in 1975. For those who do not know the Teamsters’ legendary story, here is its shortest version.

Back in the day, one of the most powerful unions was the Teamsters, and it wielded a great deal of sway over big and small things such as presidential elections and its members’ lives. That might have been so because the Teamsters and its leader, Jimmy Hoffa, father of the current Teamsters’ leader, James P. Hoffa, were notoriously tied to organized crime.

By the time the elder Hoffa was killed or executed by the Mafia, he had been forced out of the organized labor movement, had served time from 1967 until 1971, and was trying hard to get back into union work. Hoffa, 62, was last seen July 30, 1975, at Machus Red Fox restaurant in suburban Detroit. He was there ostensibly to meet with reputed Detroit Mafia street enforcer Giacalone and Anthony Provenzano, chief of a Teamsters local in New Jersey, who was later convicted in a murder case. Both men have since died, CNN reports.

The point of interest to the U.S. Treasury, ThePotholeView investigator journalist opines, is the fact that two weeks before Hoffa’s disappearance in 1975, the FBI discovered that hundreds of millions of dollars had been stolen from the Teamsters’ largest pension fund. Since that moment, the FBI, and since the 2008 crash, also the U.S. Treasury have tried to locate Hoffa’s body, and with it the hundreds of millions of dollars the U.S. government hopes to discover underneath the big man’s earthly remains.

While today’s Detroit digging expedition was futile, we at ThePotholeView wish both federal agencies more luck in the future, while we do hope that Secretary Geithner has a plan B to end the current depression.

Having Hatched All He Could Hatch, Orin Goes Sayonara