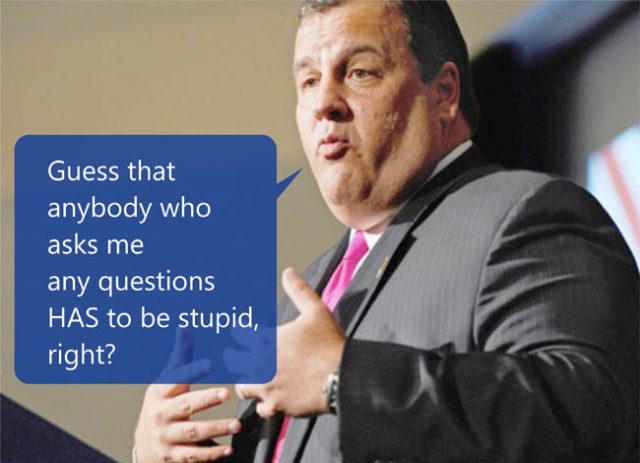 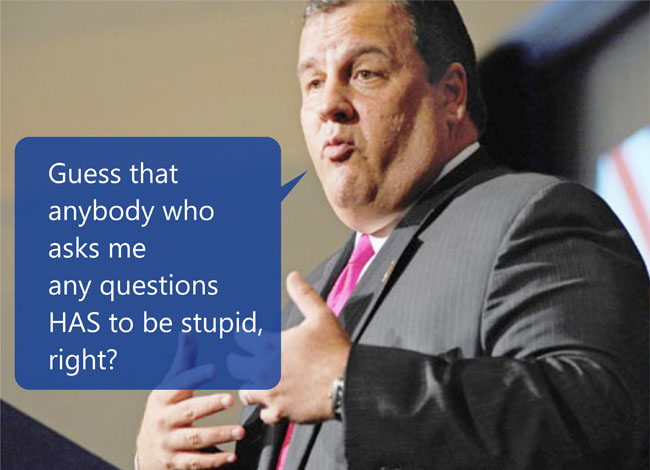 “Bad manners hide a big, true heart”. Most of the people from New Jersey State seem to keep this belief close to their chest; and they only part with it when they go to insert it in ballot boxes.

Then, the metamorphosis happens.

And one day, Chris is everywhere.

No wonder you simply cannot avoid him, or read and hear about him, just like you can’t avoid the question: Why do people, especially New Jersey residents, think rudeness is a code name for something else?

Why do they believe a rude big-mouthed man is the best person to represent them?

Here at the Potholeview we searched the Internet for answers, but found none.

Emboldened by our failure, we tried to analyze rudeness, in case our readers want to emulate the man, and here are our thoughts:

People can spot educated, smart people even when they act in a rude manner. “He is not himself,” they say. In other words, you are born rude. People tend to associate rudeness with the essence of human nature. So, if you are really rude, people would think you may be primitive, maybe a gorilla of a man, but because you are untouched by civilization, then you are even less touched by the corruption of Politics. The conclusion is only logical: rude people really care!

2. Anybody can fake knowledge

Nobody can deny that ordinary, good people have lost their nose for smelling imposture, including faked abilities. All what politicians have to do is attack you for not knowing what you do. Do they know what to do? You think so, otherwise why would have they attacked you?

One major reason for this world-wide mounting incapacity is that the science of political campaigning has evolved enormously since the Clinton and Yeltsin era. As we say it here at ThePotholeView, political parties have become so sly that they can sell you any tree from the forest as the highest pencil in the world and you buy it.

Anecdotal evidence has proved over and over again that less educated or less intellectually inclined people suspect the educated ones of plotting to take advantage of them but failing to do so. Put another way, the less educated ones view education as weakening one’s character because absent education, we are all equally rude and big.

This is our very intellectual analysis of rudeness and its attraction. After you read it, do you understand Chris Christy’s New Jersey charisma better? Or maybe you are one of those educated people who does not care to understand him?

Hope it is not too rude to ask.

And if you are a journalist, of course, you may not answer.