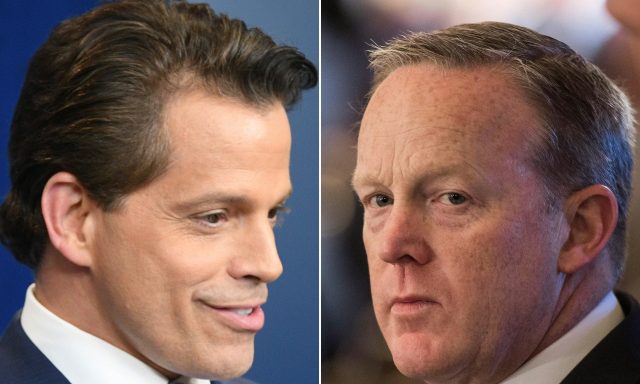 Here at TPV smooches and mooches come rarely, so here are those which filled our week hole over the past days.

On Monday, July 17, T opened the White House’s themed week, “Made in America” by boasting that he was made in America as were his children, son-in-law, and some of his wives. That should take care of allegations that everything else was made in China, Spicey said.

On Tuesday, July 18, Michael Phelps competed with a shark as if it were the Big Shark of Wall Street. It wasn’t, but the result was the same. Phelps got eaten. Figuratively.

On Wednesday, July 19, T decided to hire Anthony Scaramucci, the Mooch, for the job of the director of communications, under the assumption that he would smootch with the press and no bad coverage of the administration would happen. Spicey decided to retire.

On Thursday, July 20, Congress showed some balls and moved to sanction Russia. Mooch was on TV.

On Friday, July 21, the smooch makeover continued so well that T decided to tell everybody his defense strategy:

I’m going to pardon myself as soon As Muller indicts me.

On Saturday, July 22, T was sent out of town for the weekend without any electronic devices around. Muller had eyed his tax evasion scheme.

On Sunday, July 23, T continued to be distracted from TV as well. Not that he could have missed us, at TPV.

By DANA NEACSU:TheWeeholeView Gets a Smooch and a Makeover