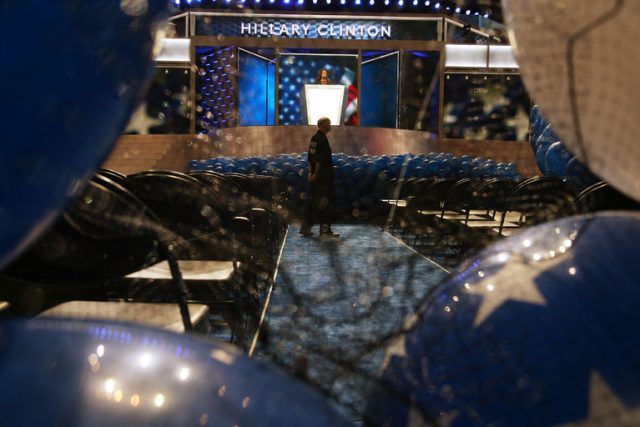 The New York Times writes today that 19,000 internal Democratic Party emails released on Friday by WikiLeaks, set off a frenzy on the eve of the party’s quadrennial nominating convention and forcing the party chairwoman, Debbie Wasserman Schultz, to accept the secretarial job for her master, Ms. Clinton. Among her duties would be to clean Bill’s back when he takes a bath at home.

The emails revealed internal discussion by committee officials — obligated under party rules to remain neutral in the presidential primary — about how to discredit Senator Bernie Sanders the Burp of Vermont and keep up the appearance of neutrality. They failed, but the circus has to go on. It will be of further interest to TPV to see how Ms. Clinton will become president. TPV suspects a Constitutional amendment allowing ambitious wives to become presidents if they wish so when their husband has served as president. Just like in countries further south.

But what TPV’s found fascinating is how soviet the system has become, and how Putinesque.

Case in point, here is how two obnoxious Democrats get to spend their Democratic weekend: begging to take a selfie with the sitting Democratic President. The heroes of the leaked sketch below are a Mr. Munger and a Mr. Potarazu, the latter employed as an ophthalmologist suffering of cancer (both names are real).

Mr. Munger: I am the son of the  Berkshire Hathaway billionaire Charles Munger Sr., and I am entitled to seat next to Mr. Obama at this round table. I am the largest donor to Mr. Obama’s political group, Organizing for Action (OFA), and a huge potential source of money for the committee.

Mr. Sreedhar Potarazu: I am a Maryland ophthalmologist whose family members are already major Democratic donors. I want to share my story of my own battle with cancer with the president. The Potarazu family, which includes mom, dad, grandpa and grandma, has signed their scribbled names on checks in value of $332,250, which is not much by Hampton standards, but this is only  since ’13. I alone have written my name on checks in value of $100,600, and that is in only one party begging.

The problem apparently was that Mr. Potarazu gave to OFA and not to Ms. Debbie. Furthermore, while Mr. Potazaru is not a duche per se, everybody around him, including the Democrats are.  Also, his mouth smells badly because of the type of cancer he suffers of, and he refuses to use the mouth wash endorsing the Democratic Convention, “One Asshole One Mouthhole, let’s make them smell the same”.

If you wonder who sat next to the President, Phil Munger (Mr. Munger) won the coveted seat. Apparently, Mr. Potarazu has stopped partying with his money so easily. Now he travels to exotic places in search of himself. He is reportedly free of cancer as of today.