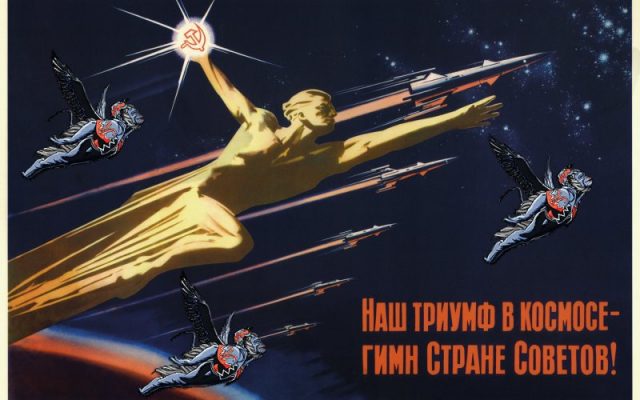 This was kind of a tough one for Marquel. He didn’t want to get too extreme but it seemed as if during World WAR II, we might have asked the Germans to send picket ships along with our convoys to protect us from German submarine attacks. Or sending Jane Fonda to the Pentagon to conduct the Viet Nam fiasco. Or having George Bush invade Iraq. Well there you go, Marquel guessed we have done stupider things before.

But still. We haven’t decided to use Russian help just to supply the space station with potatoes and vodka. Not at all. Instead, the Pentagon says only the biggest security missions will use Ivan’s rockets. Huh?

Could this be related to the recent NSA controversy, when we recently stopped collecting intelligence entirely because of Congressional quicksand and mire? Maybe we have no secrets to keep anymore. So it doesn’t matter. But letting the Russians drive around our spies surely must be embarrassing.

“Russian embassy? This is the CIA. We’ve got a guy to kill in Crimea but can’t get reservations. … Oh you have something going there right now? Hold the plane we’ll be right there.”

“Russian Embassy? We’re having a debriefing of one of your counter spies at at Plume at the Jefferson downtown but it’s raining. Can’t get a cab.  No. 15th and Dupont? Be right there!”

Or how about when we caught Aldrich Ames?

“Russian Embassy? CIA here…Oh you already know that. We’re interviewing this Ames character and there are some ambiguous Russian terms. Could you help us nail them down? Good. Your place or ours?”

Or Robert Hanssen, another counter spy. This time it’s the Justice Department.

“Russian Embassy? The Hanssen case again. Look we’ve got to prove actual outing of our agents. Could you give us at least a partial list, especially those who are now deceased with your help, and an affidavit that it was due to his disclosures? Thanks. I don’t know what we’d do without you.”

Makes you wonder. But if they’re being so helpful how come we wouldn’t let them have that World Cup? It seems like the least we could do.
***
By MARQUEL:  The Russians Are Coming into Our Space