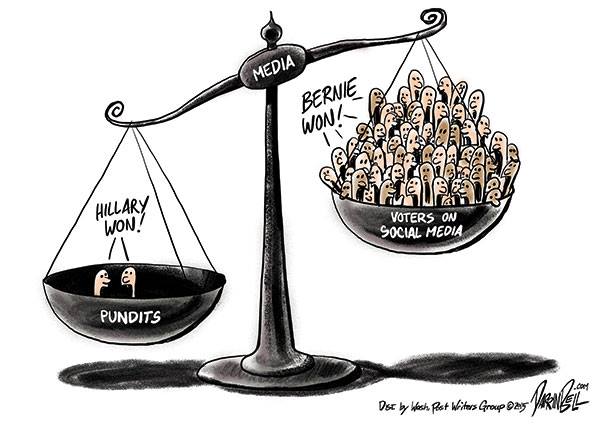 Here the week starts periodically and this is what fell through the TPV hole this past week:

Sunday, October 12, #CNN sent Hillary the questions, but #WikiLeaks intercepted them and rerouted the email to all the candidates. Bernie, having lost his email password, could not read them.

Monday, October 13, CNN announced that they would cancel the debate if they could. Under pressure from democratic journalism only the time the debate started became TBA.

Tuesday, October 14, the first Democratic presidential debate took place and #Hillary was treated as the Lady she is: Only, her well rehearsed questions were asked.

Wednesday, October 15, #Ellen invited Bernie to her show, and she let us all see she felt the Bern.

Many, many people like you, Senator, and now I know why too. You are authentic. Hillary does not understand how much that means to the American people.

Thursday, October 16, Hillary people discovered they had one way to win the debate. Paint Bernie into an idealist Dukakis, and #Hillary into a pragmatic #Nixon, because she’s crooked alright.

Friday, October 17, #Hillary’s people approved the SNL sketch and the candidate promised she would watch it between her mandatory daytime naps.

Saturday, October 18, #SNL mocked the Democratic presidential candidates. Jim Webb became a Republican stiff in Alec Baldwin’s depiction, O’Malley and Chafee were discarded as irrelevant, while Larry David, who made good money writing about nothing chose to be #Bernie for this early Halloween. Doing so #Larry told us nothing is what he gets from politics.