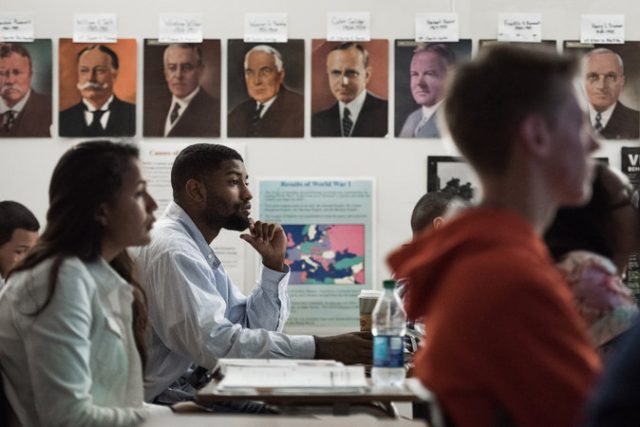 The number of students completing high school has reached historic peaks, yet other measures of academic readiness for college or jobs are much lower. It sort of made sense, thought Marquel, as he tried to do some quick calculations, which failed of course.

He sat down with one of the New York State regents. “Last year how many seniors passed English?” Asked Marquel.

“Okay,” said Marquel, “and how many this year?”

The regent looked up and said “84 ” without using documents.

“How’d you know that without looking it up?” Asked Marquel.

“That was our milestone. It was our target number for the last year.” He answered.

“In  other words no matter what people did on the tests, 84 was going to be the year’s average.” said Marquel.

“Oh yes, we’d decided that was a fair and respectable level considering what they knew and had learned.” the regents said.

“Which is exactly what they knew and learned last year,” said Marquel.

“So that an 84 this year is exactly equivalent to a 66 last year.” noted Marquel.

“Except that instead of failed, 16% more seniors passed, graduated, and received a high school diploma. And felt good about themselves.” The regent added.

“But they knew exactly the same no more no less than some of the guys, 16%, to be exact, that had failed last year.” Said Marquel.

“So let me see now, you’re concerned that the diploma now might not carry as much weight?” I asked.

“Yes we worked very hard at this and our target took into consideration virtually everything. So this is a real and valid diploma.” He said.

“But let’s consider last year’s employers. They hired these graduates and some of them couldn’t do diddly squat. Now comes along these graduates with HIGHER GRADES but they know no more. You admitted they’re equivalent. So the employers know that the grades are higher but the competence is lower. What would they logically think of the diploma? The same…better…Or worse?” I asked.

“Well if they look at the metrics, the performances, and the competencies, they’d know this diploma is better.” Said the regent.

“But if they look at how well the students are prepared, they’ll know they don’t know Jack shit. And the diploma means just that, right?” I asked.

“Well that would be very unfair and ignores all the metrics . Plus how much better the students feel about themselves.” He said.

“Tell me regent, ever been fired?” I asked.

“Think it feels good?” I asked.

“I can’t imagine it does,” he admitted.

“So when 16% or more of this year’s graduates with their inflated diplomas get fired, do you think that phony diploma’s still going to make them all feel better about themselves?” I asked, trying to control myself.
He was busy looking through his documents. I left. He was still looking and hadn’t said a word.
***
By MARQUEL: Diplomas in Diddly Squat.