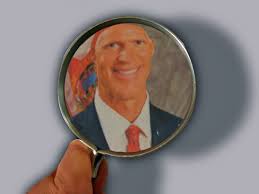 Florida Governor Rick Scott, while not explicitly stating so to the media outlets, has banned the use of terms “climate change” and “global warming” in official documents.  Instead, officials are being asked to use “nuisances”, as if Dennis the Menace suddenly became God.

Riding the coattails of such an ingenious demand, “death penalty”, “poverty”, and “abortion” are also banned and now conveniently dubbed “other nuisances”.

When this reporter reached out to Governor Rick Scott, a representative told me,

“stop being such a nuisance”.

I sighed and waited. For obvious reasons, I was being christened a “nuisance.”

To my surprise, she continued,

“the ‘global nuisance’ you are speaking of is merely a liberal ploy to drain the money out of Washington, and convert our proud Democracy to a Socialist State.”

I asked whether she was allowed to say “socialist”. She listned to her earpiece for a few moments and then smiled. She said she would have to get back to me.

I asked a local resident, Craig, about this ban.  It took him a while to translate my question from English into English and then he agreed.

“It’s all a bunch of rubbish!  You’re probably asking yourself, ‘Gee Craig, how do you know that?’ You see these three eggs I’m frying on the hood of my Corolla?  If we had any type of global warming, it would take these eggs significantly less time to cook than they do.’

I scratched my right ear with my left hand and I finally left. Both Florida and its science fiction.

By Heath Mayhew:  Climate Change Is So Yesterday, Says Rick