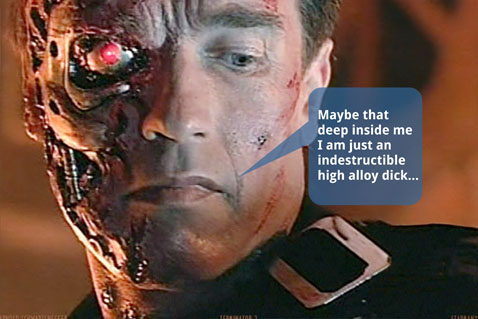 In the 1993 action movie, Demolition Man, Bruce Willis’s character is thawed (after being cryogenically frozen in 1996) in the year 2023 in future state San Angeles (aka Los Angeles).  At one point, Bruce has a conversation with Sandra Bullock’s character:

BW: Hold it. The Schwarzenegger Library?

SB: Yes. The Schwarzenegger Presidential Library. Wasn’t he an actor when you…?

BW: Stop! He was President?

SB: Yes! Even though he was not born in this country, his popularity at the time caused the 61st Amendment which states…

It may seem decades since that movie (almost two to be exact), but are we not still mesmerized by Schwarzenegger, even despite his recent scandal? Shouldn’t we have been appalled by his secret life?

Yet, with his recent tour around the world where people cram into bookstores to see him (and never ask about Maria),  and his apologetic television appearances, we’ve blessed him with indemnity.

He is human after all.  Caught up in an appetite that he didn’t understand, bound by emotions he suffocated in.  Yet, the cult of personality strikes at the heart of this matter – we’ve pardoned a man, of celebrity, of political character, who is a stranger to us (and to his wife).  We’ve condemned those closer to us for less.  I don’t think I’m alone when I say that this isn’t the last time people mistake a portrayal of a leader for an actual leader.  We may not get to the 61st amendment – instead it looks like it’ll be the 27th or 28th amendment.  Arnold 2020.