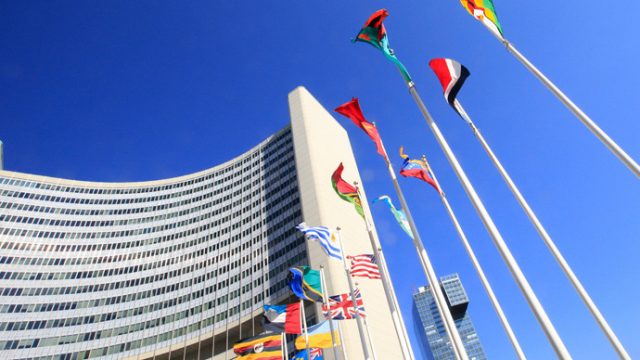 The United Nations is the symbolic gesture of world peace.  Certainly that’s a lot of pressure for any person to work under, but they’re the cream of the crop; the alpha dogs; the smartest, most gifted personnel.  So why the drinking rumors?

Apparently (rather too conveniently the blame is being placed on individuals from several specific countries, which I will withhold), several U.N. diplomats have been coming to budget discussions completely clobbered (i.e., shitfaced; jazzed; bent; stiff; Merzbowed; sodden; boiled-as-an-owl; drunk; etc.) The U.S. U.N. delegate, Joseph Torsella, was clearly upset during his speech to the Fifth Committee, saying, “As for the conduct of negotiations, we make the modest proposal that the negotiation rooms should in future be an inebriation-free zone.”  I’m not sure, but that sounds like the old smoke and mirrors routine – that dude is totally sauced!

The report indicated that most of the drinking occurred during the Group of 77 (or, G-77) budgetary discussions.  Originally consisting of 77 developing countries, this group has now expanded to include a total of 132 countries.  Several representatives, reported an anonymous delegate, of specific countries got so drunk they were unable to conduct proper negotiations.  There were others who missed the negotiations altogether because they consumed too much alcohol and got sick.

All of this sounds like an unfortunate case of mudslinging.  The reason may be that G-77 has demanded a bigger voice when budgets are approved – traditionally, budgets have been approved by consensus, which allows the wealthiest nations a veto over budgets, but G-77 is asking for a vote by majority.  In December, voting by majority, G-77 put a single budget measure up for a vote and won.

Whoever is spreading the rumors, or which ever countries are trying to gain back the consensus vote, it seems to me that they are afraid of being caught drinking themselves.  I hear that anonymous delegate now, ‘Hey, don’t look at me.  Nothing to see here.  No champagne here.  It’s over there, see.’  ‘But you said we were all drinking…’ says the poor developing country delegate.  “No we didn’t you drunks,”  rebukes the anonymous delegate.  The old adage seems to fit perfect: he who observed it served it.