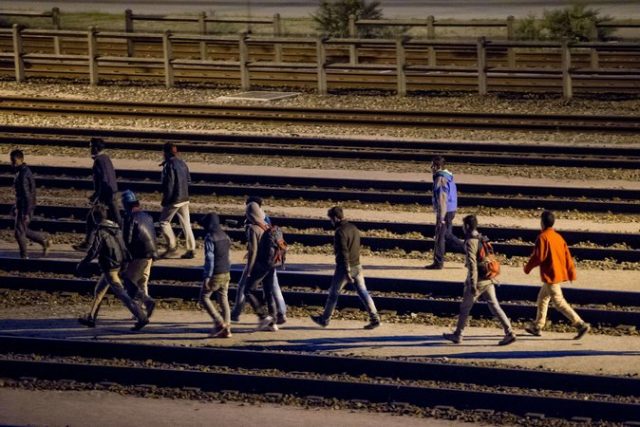 Marquel, TPVs NYTimes East is East and West is West Section correspondent, was flying a kite when he read that Britain and France Scramble as Migrants Keep Trying to Cross Channel. Migrants, illegal migrants, that is, are all headed to Britain where, apparently, they think the livin’ is easy. And they’re trying to get through the famous Chunnel, which crosses the English Channel underwater.

In fact as of yesterday at around ten p.m. Greenwich Time, authorities reported that Pakistan has only 12 remaining occupants. The rest of both eastern and western Pakistan are in the Chunnel, trying to enter England.

An expert on the scene says, “There are about 100 million of them in there, filling the Chunnel to its seams. The west Pakistanis have set up camp in the west end of the Chunnel, and the easterners are in the east end. They would like more space and better separation from one another but there simply isn’t room. They’ve put a line of dental floss between them  That is apparently the border.”
The authorities say the immigration problem is ” ‘unsolvable.’ They just keep coming and coming.” The English, however, insist there is a solution: “make England less desirable.”
Marquel was curious how they would do that. So he asked.

“First, it’s our fucking politeness. No more of that shit,” said Prince Charles, who until now had been called Prince Traditionalist. He is encouraging all shopkeepers in Britain, the foundation of English culture, “to be fucking rude. Tell your customers to get the fuck out. Ask them what the fuck they want. Tell them they smell like shit curry.”

Another factor, said the Prince, was English.

“The immigrants don’t want to stay in Italy or France or Germany. They speak English so England attracts them. We have to change that.” He said.

“It’s a two step solution. First, if you recognize a foreigner, do not speak to him in English. If he or she addresses you in English say, ‘I’m sorry I don’t understand you. You’re not speaking fucking English. Get the hell out!’ The second step is a bill presently in parliament requiring all retail sales to be conducted in French or German. That should settle it. They’ll have no reason to stay.” He said.

“You think immigrants come here just to practice their English and enjoy your politesse?” Asked Marquel.

“Heavens no,” said the Prince. “They come for our gardens. But we’re spreading lime in all our gardens to turn them brown, yellow, and unattractive. They also come for our civil liberties. So from now on we are arresting everyone who starts speaking in Hyde Park.”

“But you’re destroying your own culture!” Protested Marquel.

“Sometimes, as a famous American once said, you have to destroy the village to save it,” said the Prince.

“First of all, he wasn’t famous. He was a despicably unimportant army captain in Viet Nam. Secondly, he was condemned by everyone. That’s why the phrase is well known. Because it’s despicable.” Said Marquel.

“Because that’s another reason they come here. We have the world’s best east Indian foods. Our curries are world famous. No more. It’s forbidden by parliament. You order lamb curry, you’re getting lamb and kidney pudding. You ask for papadom or other hot items, you’re getting Shepard’s pie. I think we’ll have this solved within months.” The Prince predicted.

“You really think so? I’m not sure this is a war like WWII where victory is easily decided. It could go on for generations.” I said.

“We’re prepared for the long haul. All we have to fear is fear itself.” He said.

“With a hundred million in the Chunnel, I think you have more to fear than just fear.” I predicted.

“Hold on, hold on, Winston. That’s Churchill you’re quoting. But nobody is bombing you. There are no landing zines. You’re facing a European problem. Maybe a hemispheric one. You can’t prevail by yourself on this one,” I argued.

“That’s what you think. We will use all our blood, sweat, and tears.” He said.

“Well good luck to you but I think that Chunnel is going to empty out soon and you’ll have to figure out a better solution.” I said.

“Oh yeah, well fuck you and your fucking mother. You look like shit to me, and can’t tell your ass from your elbow.” Said the Prince.

It seemed a novel strategy and I could only wish him good luck. The English have always been a charming people so I was sure they’d get it right eventually.
***
By MARQUEL: The Prince and the Paupers