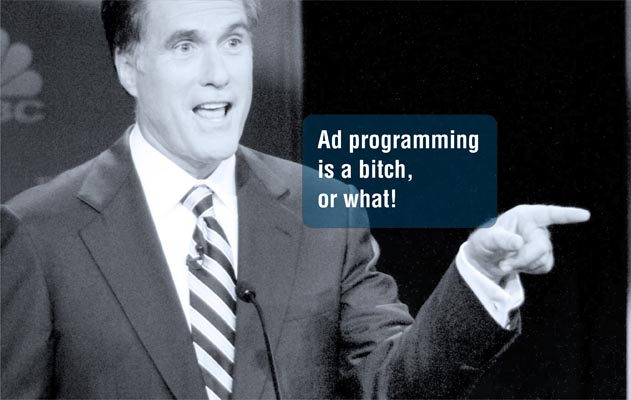 I do not own a television set, and I haven’t for years.  The whole concept seems inane to me, since to own a functioning television would entail a series of expenses: the actual set, getting cable installed, etc.  I’d much prefer watching “television” (I believe we still call it that) on my computer.  Programs like Netflix and Hulu have given me the ability to carefully select those programs that I enjoy, and which ironically allow me to further indoctrinate myself with healthy liberal ideals.  In other words, by watching The Daily Show and The Colbert Report on a regular basis, I have kept up with the news while fending off conservative commercials that I might conceivably come across while watching “real” television.

Of course, I’m part of the problem for conservative candidates.  They’ve never been able to get me.  That is, until now…  (cue awkward segue).  Mitt Romney’s campaign recently announced that it has found a way to target people like me, who “watch” television without owning one.  Thankfully, his test-stage is Wisconsin, which makes sense with the upcoming primary.  This is how The New York Times reporter Jeremy W. Peters sums it up:

Here in Wisconsin, where the Republican primary is Tuesday, carefully targeted potential voters will see two Romney commercials on their Web browsers.  One is  a positive message hailing the candidates economic and business credentials.  The other is an attach criticizing Rick Santorum as a Washington insider, who  compromises his core beliefs.[i]

Before I make my points I want to note that, if you are interested in following this further, you should take a look at Peters’s piece.  There, you can find the links to the pertinent videos, that demonstrate Romney’s credentials and Santorum’s “insider” status.”  The phrases  “hailing the candidates economic and business credentials” and “criticizing Rick Santorum as a Washington insider” contain hyperlinks that I could not transport into this article.  (My technological knowledge does not go much further than clicking on Hulu videos.)

Ok, now I can go on.  The point of this new advertising strategy is to not only gauge viewers’ interest, but to track whether these commercials have any real effect on them.  Based on your browsing history—and whether you send the links to friends, incorporate them into your Tweets, etc.—you will be targeted by specific commercials.  If a computer predicts that you are more likely to respond to an attack ad, that’s what will pop up!  If it thinks simply having more information about what Romney has done, than that will pop up!  (Magic!) Of course, anyone who has been following my writing knows where I am probably going with this: with the help of the digital strategy firm, Targeting Victory, Romney’s campaign has created a new game for us, that is based on how our political personalities seem to a team of technological specialists.  Or, for the adult readers, perhaps a drinking game that involves taking a shot every time an ad attacks Santorum for voting for Planned Parenthood?

One of the nice things about this campaign strategy is that it’s relatively inclusive.  Zac Moffatt, the digital director for Romney’s campaign, has said that, “We are site agnostic and audience specific.  It doesn’t bother me what site they’re on.  I’m just looking for an audience.”

Now I need more information.  What sort of sites are going to be riddled with Romney advertisements?  How inclusive is the Romney campaign?  Now, let’s get back to that title of mine.  I am not suggesting that the Romney campaign is ready for this step just yet, but I am going to say this: running a couple of ads on even a semi-pornographic website would be WAY more effective than (for instance) anything that will come out of the new The Conservative Teen magazine.[ii]  And it might be a step in the right direction, for reaching out to those demographics you’ve been missing.  Besides (thought experiment time), if you were on a pornographic website and an ad for Mitt Romney came up, you’d click on it, right??  (Yeah, me too.)

[ii]    For more information on this relatively new magazine, check out a recent episode of The Colbert Report ; also, you might like Erin Gloria Ryan’s “The Conservative Teen: For the Prematurely Elderly Teenage Lame-O in Your Life,” from Jezebel.