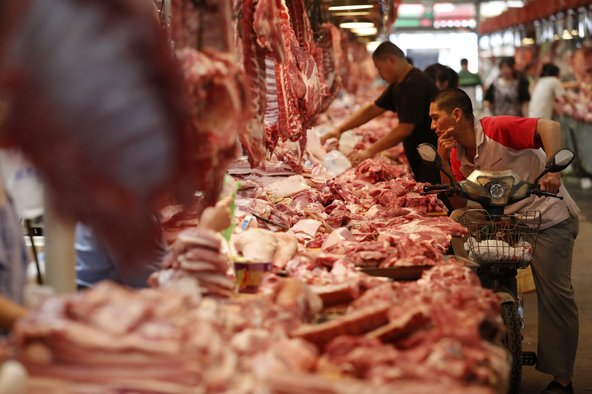 Marquel, TPVs NYTimes Just In Time Section correspondent, was finishing his burger when he read that 100,000 Tons of Smuggled Meat, Some From 1970s, Had Been Seized Across China.

Forty year old beef sells big, in China. Even though it’s frozen, it is shipped in non refrigerated trucks. So the companion story, in the Times, about a dog food festival (That’s dogs for people, not Alpo!), sort of balanced today’s news from China, in an unbalanced sort of way. (The dog story ended with a quote: “We love dogs. Dog meat!“).

But the dog story underlined the cultural subtext, in a way, which seems to be, in cross-cultural circumstances, each to his or her own. There were only two places to go for this story, Mufi, whose Chinese restaurant on Bayard Street, is the best kept secret in America, and Peter Luger’s steak house in Brooklyn, whose main vocation these days, besides offering the best steak in the world, seems to be shaming every former Luger’s employee’s new startup in Manhattan to implicitly admit they’d been fired.
Mufi wasn’t shocked. “You’ve never heard of thousand year old eggs? We’ve been serving that for, well, thousands of years. I’ve never had forty year old beef, but that’s not even half a century. I think we might be able to do something with it. Not too spicy. You want to bring out the time it has stored away.”
“But think of the germs, the bacteria,” I noted.

Think of the germs in your tongue,” he answered, “more than in your rectum. Scientific fact.” He assured me.

“To tell the truth,” he said, “food is inherently risky. And meat is probably at the top of the list. First we go for safety, then flavor.” He surveyed his packed restaurant with obvious

pride.
“So you receive a shipment of forty year old beef. What do you do with it?” I asked him.

I looked at him. I went to Brooklyn.

“I could but who would buy it?” I asked.

“This isn’t a Chinese restaurant. Our many Asian customers come here for our porterhouse aged precisely 32 days under carefully controlled temperature and humidity, then trimmed equally carefully.” He said.

“So you’re saying you just wouldn’t take delivery? There’s absolutely nothing you would willingly use this for?” I asked.

“I didn’t say that. I couldn’t serve it. But we could package it as dog food. Luger’s dog food.” He looked proud, too.

The story seemed to have come full circle. Or maybe only full semi-circle. But it was clear, in matters cross-cultural, each to his or her own.
***
By MARQUEL: To Each His Own