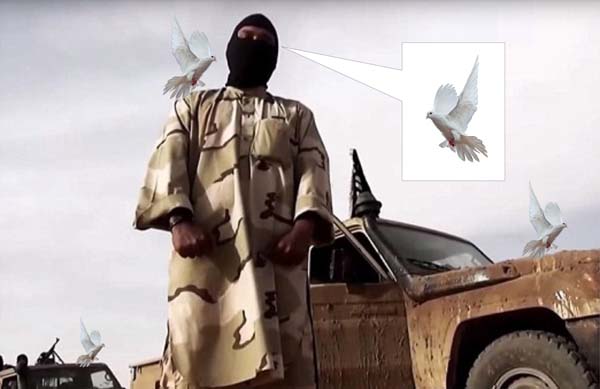 Recently TPV hosted a few scholars with money to vacation in NYC and had a discussion about Trump and terrorists.

Analysts believe that the stand by is connected to the Trump mandate.

“It must’ve occurred to them that is more effective to leave Trump alone,” all three analysts agree.

“The  terrorists’ goal has always been to undermine American ideals, like freedom and democracy. Letting Trump do his work it may seem a more cost-effective way to achieve it,” added another hungry think tank analyst.

TPV sighed. True. More Americans are fleeing the country now that Trump is in the House.

Worse, many Americans are now seeking refuge in Syria, mostly to Aleppo.

“True, gotta get used to havoc and ruins in case they ever come back” the oldest, wisest analyst added.

It does look that the terrorists have finally found competition worth bowing to, or as SNL would say:

In other news, Trump is silencing terrorists.

By Calin Georgescu: Trump and the Terrorists Speaking the Same Language – Chaos