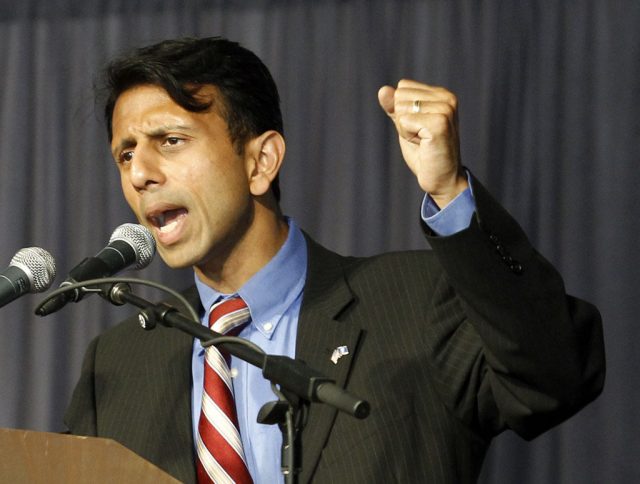 Our everyday regular politicians vying for our attention remind us that religion is still going strong.  Louisiana Gov. Bobby Jindal (R), for instance, recognizes the relevance of religion and has decided to do anything to leverage the power of the Holy Bible for personal and political gain.

Unlike all other presidential hopefuls, Jindal decided to skip Iowa to instead attend a national spiritual revival rally and urged event attendees

“to proselytize on behalf of their Christian beliefs.”

“the secularistic certainty that religion will disappear worldwide in the course of modernization,” has lost the ground.

As he entered the Baton Rouge stage, Louisiana Gov. Bobby Jindal waved a Bible in his hand, courting Christian conservatives for a possible presidential campaign. When we asked why he headlined an appearance at an all-day prayer rally hosted by the American Family Association instead of going to Iowa, the Governor responded:

“Sonderweg… Special path, my friend. With God’s help, I will bag the tea party.”

We wondered if he was as religious as he presented himself to be and asked how can educated men with degrees in science and medicine reconcile with theocentric and metaphysical worldviews;

“I am just a simple MD doctor; you probably think that I have Ph.D. First of all you are confusing me with someone with a scientifically enlightened mind. Second, if you talk to the enlightened people, they will let you know that we are so beyond that secular crap. I talked to my German friend Jurgen Habermas, and he explained to me why the whole leftist secular project has retired. He calls it post-secular. I am afraid other Republican candidates will catch up soon. So I have decided to attend as many prayer rallies as possible. Besides, it is much cheaper to headline a prayer rally than organize an Iowa campaign.”

We reminded the Governor that religious institutions in this great land of America are supposed to restrict themselves to their proper function of administering the means of salvation. When we asked why has he turned exercising religion into a public matter, the Governor responded:

Sometimes we have to accept the fact that our forefathers weren’t that bright.  They thought by artificially separating Church and State, Jesus would lose public influence and relevance. Even after what our forefathers had done to religion we still have vibrant religious communities, religiously committed and active citizens, and with the blessings of God, we, the Americans, are the spearhead of modernization. Our religious modern American society exemplifies the norm.

Jindal, who was raised by Hindu parents and converted to Catholicism in high school, told the gathering how he found Jesus. He told the attendees:

Meanwhile, in an unrelated interview, Governor Jindal who once warned fellow Republicans they “must stop being the stupid party” seems to have fallen into the stupid trap.

When CNN correspondent Max Foster pressed Governor Jindal to explain his comment about ‘no-go zones’ in London’s neighborhoods “where non-Muslims do not feel welcome,” he wasn’t able to name any:

Look your viewers know absolutely the places where they are less likely to go to. They absolutely know the neighborhood where they won’t feel comfortable.

However, Jindal quickly asserted that:

Governor Jindal is of course not against religion, he just thinks his is bigger.

Ibrahim Sajid Malick: Jindal for President ’cause He’s the Biggest