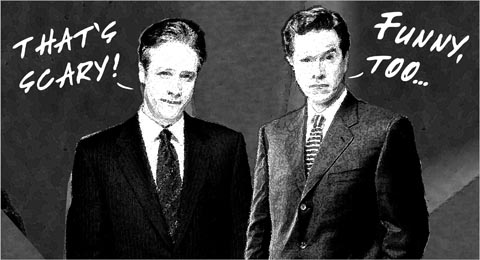 As far back as I can remember, there has never been a better running political joke than the series of “Super Pac” segments performed on The Daily Show and The Colbert Report.  If you have no idea what I am talking about, do yourself a favor and check out http://www.colbertsuperpac.com and watch episodes 52 and 55 of The Colbert Report‘s current season.
(These episodes are currently available through hulu.)[1]  It’s all the more important that you do so, because of the stink that is being made about it by various new sources—and the ongoing stipulation about what Colbert will do with the money he has collected (well over one million dollars).[2]  Reporters who are spending their time trying to figure out how Colbert’s Super Pac will influence the upcoming election are missing the point.  Indeed, by asking the question they make Colbert’s point for him—since they implicitly recognize that his Super Pac could have an effect.

I could not imagine a more biting criticism than the one being offered by Colbert and Stewart.  Here is an example of one comment Colbert recently made on his show, regarding the power given to corporations by the Supreme Court’s recent ruling that they can donate an unlimited amount of money to candidates, as long as they do not “officially” have business relations with that candidate:

He goes on to point out that over 60% of the money donated to Republican candidates has come from 22 individuals.  From my perspective, that is quite the problem—though, perhaps, there is no easy solution.  Several people have pointed out that Colbert’s comments bring attention to the ability of corporations to buy an election.  I contend that his point goes further.  Here and elsewhere in his program, we see that the Supreme Court’s decision has made it possible for corporations to publicly buy an election.  Isn’t there something out-of-whack, when an electoral system allows these companies to do something like this in broad daylight?  Is there, as Colbert seems to suggest, something especially nefarious about the fact that corporations do not need to hide their influence?

This brings me to a basic paradox behind the attack being spear-headed by Colbert and Stewart.  By taking advantage of their huge audiences, they are bringing this influence into the limelight—while also suggesting that it is going on right in front of us.  In other words, they increase the visibility of current political corruption by pointing out that it is already visible.  This, I should say, is a brilliant use of satire.  It teaches us how to read the news, in the sense that both Colbert and Stewart want us to be aware of what is already in front of us.

Now, to bring it back to my previous point that commentators miss the point, when they wonder about where the Colbert Super Pac will go.  At the same time that they miss the point, they make Colbert’s argument by recognizing the influence of a Super Pac, even if it is created by a “fake” news source.  The ongoing joke is about the visibility of corruption, and of the media’s questionable coverage of that corruption.  In this light, Colbert and Stewart have made a brilliant point, which has been furthered by those who have been supposedly attacking its validity.

[1]              The joke has been shared between Stewart and Colbert, though Colbert really has been the driving force behind the concept.  So, it might be helpful to look recent episodes, to see how Stewart has shared the joke.