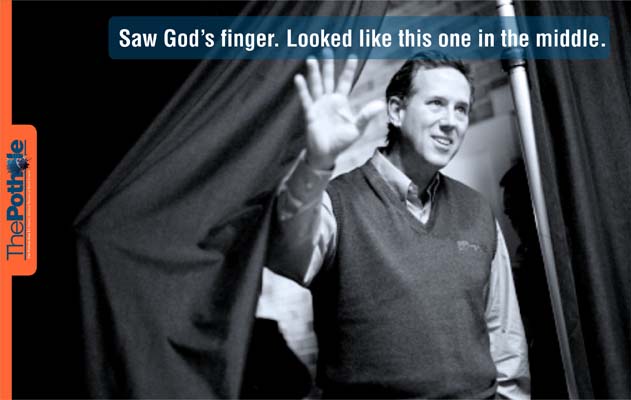 A few weeks back, I said that Obama did not have what it took to be my candidate, but do I have a choice? No. So, at the risk of being perceived as a flip-flopper, Obama, I take you back.

I take you back, Mr. President, because I am scared of Rick Santorum.

He wants to dismantle public schools because they look like “equal factories” in a country where people “come off the farms” … to do what Rick…? To vote for you?

I do not recognize this America, but if Rick is going to rely on his understanding of history, he should go a little further back, before European navigators found these faux Indies. If Rick believes that Americans will vote for his sci-fi promises of time travel, let us go back to a time when there was no flu, or other European ailments. Let us all move into tepees, eat corn and smoke a pipe with Rick, because he surely smokes a lot of something to be able to tell us the tales he tells with a straight face.

Rick brags about the American presidents who home-schooled their children, perhaps because he wants to be or become one. But he neglects to mention what they did after home-school hours: fondled their slaves. Rick, what if forcing parents into becoming ad-hoc teachers creates a need for fondling slaves? What is your solution for that? Tell us your ideas, because without slavery, we risk being equal to one another, and both you and your Republican posse seem to reject this novel idea of “equality.” You keep saying that you are a proud Christian. I thought that theology stood for some equality. Or, is it only equality after death – something not too threatening to the political beliefs of Candidate Santorum?